Raycasting Game Maker(RGM) is a rather rounded set of tools for creating Wolf3D-style first-person shooters. Despite the dated graphics and resolution, RGM offers a good bit of control over customization and the look/feel of the game. For an FPS creator, it’s no Unreal Engine, but for what it is – a 90’s-era FPS maker – it’s pretty impressive. While RGM has long since been abandoned by its creator, it seems to still have a following to this day. 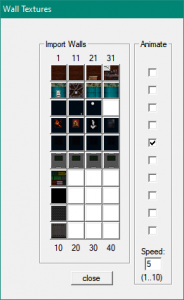 Checking a row’s Animate box sets that row of images to be a 4-frame animated wall.

The Tools and Process

The tools include the main map/game editor, a menu editor, and a cutscene editor.

Almost every graphical aspect of a Wolf3D-like game is editable. Walls, doors, floors, and ceilings can be added with the click of a button. Weapons, ammo, and other items that can be picked up have their own pop-up menus that let you configure basic settings for the item type they are.

The menu editor lets you change the font style/color/size and the background for each of the menu screens. The position of text cannot be edited. The cool thing is that RGM doesn’t limited you to a preset collection of fonts. Any truetype font you have on your computer can be used here. Your finished screen is saved as a Bitmap image that gets imported into your game’s pak file.

The Mouse and Keyboard Controls in the Game Settings panel offer quite a few options,  but whatever you decide is what you are stuck with – there is no in-game way to change the key bindings.

The creation process is simple – replace the existing sounds and bitmaps with your own. Settings for weapon and enemy variables are minimal, but they are intuitive and cover all the basics. Completing your game consists of 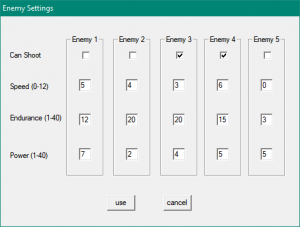 The enemy settings are minimal, but enough to offer some variety.

The game window is 640×400 and the general texture size is 128×128. For anything remotely modern, this is obviously unusable, but for a Wolf3D kinda thing it’s more than adequate. They’re also much larger than the 64×64 sprites used in the original Wolf3D games.

Adding assets has some limits. Those limits are: I wanted to see how much mood or atmosphere I could put into something with such limited resolution and item caps, so I went with a “horror” theme. While the engine supports 20 levels (more if you get creative with the pak files), I decided to stick with a doable 3-level game.

I gave myself two weeks at a couple hours a day to see how far I could get. Quality of my art (and I use the word “art” very loosely) aside, the actual creation of assets was easy. I used Piskel for sprite creation and Photoshop for my backgrounds and cutscene images. For sound effects, I used various WAVs pulled from several ancient Sound FX CDs. The music is a combination of MIDI songs I made and a spooky song called “Ravensbrook” that I bought for a buck on Amazon.

With a few days to go, I had completed four mobs, three levels, two guns, the helpscreen and menus, and a couple dozen sprites for the walls and items. In the end, I had an EXE and two PAK files as my final distributable. My final creation, Ravenwood Manor, weighed in at about 39Megs total. Worth noting is that the majority of that is the WAV files for sound effects and music.

Will people recognize a game is from this maker/creator?

While people will readily be able to tell your game is based on some form of Wolf3D hack/clone/edit/etc, it is very easy to create or customize something unique or different with it.

A good basic tutorial can be found here.

and, of course, Ravenwood Manor. 🙂